There are several types of sensors used to measure temperature, and send them to electronic devices. There's no best sensor for all uses - which one you pick depends on what you're using it for. Things to consider: What temperature range am I measuring? How accurate do I need it to be? Do I need the electronics to be simple? How am I converting the sensor's reading to temperature?

Here's an overview of common types:

RTDs are accurate and cheap. Their response (temperature / resistance) is nearly linear in the range of 0 - 100°C, which makes temperature easy to compute. (It's easy to write a transfer function, and doesn't use much computing power) Compared to other types of sensors, RTD response varies very little over time - this means you can go for long periods without calibrating.

Here's an example PT100's response. Notice how it's mostly linear, especially if you look at a small segment: 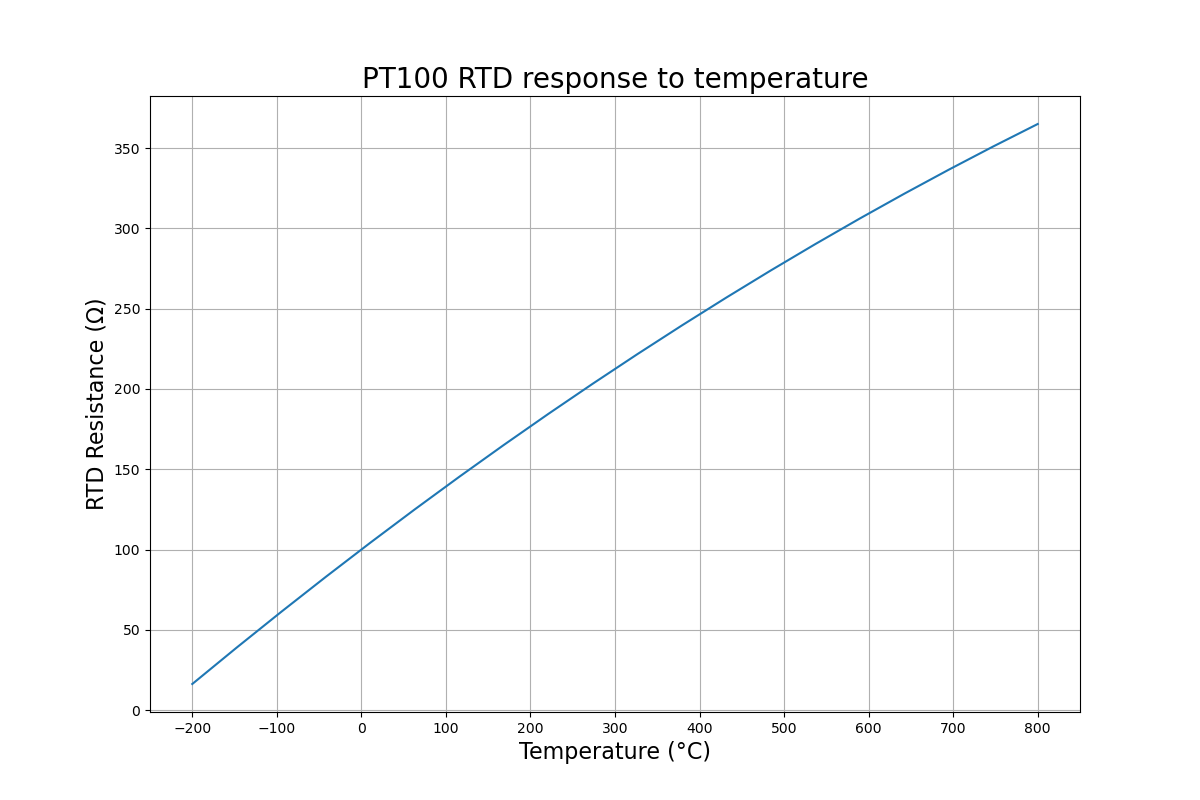 To measure resistance, and therefore temperature, RTDs need circuitry that passes a current through the sensor. The output is a voltage corresponding to RTD resistance, which is then passed through an Analog to Digital Converter(ADC). After the ADC, a microcontroller or computer can read the voltage, and convert it to temperature. Four-wire setups require the most complex circuits.

RTD circuits usually consist of one or more op amps, a precision voltage reference, and an ADC. In some cases, the entire circuit is built into a single chip, which connects to the sensor, and outputs the temperature digitally. Our RTD module uses one of these.

Because a RTD measurement is determined by its resistance, the resistance of its lead wires introduces errors. This can be mitigated using a third or fourth wire to compensate. Here's a breakdown of 2, 3, and 4-wire RTD circuits:

Two-wire circuits are the simplest to design, and cheapest to make. Their readout tends to be slightly high, due to not adjusting for resistance of the lead wires. This can be minimized by using shorter wires, thicker gauge wires, or a higher-resistance RTD. For example, PT-1000s suffer less from lead-wire resistance than PT-100s.

Three-wire circuits are the most common, and have an additional wire on one side of the sensor. Their circuits measure resistance between each pair of leads. This information is used to determine the lead wire resistance, which is then subtracted from the resistance measured across the sensor. Three wire connections are suitable for industrial purposes.

Four-wire RTDs are the most accurate, and are ideal for laboratory use. They require the most complicated circuit: 2 wires are on each side of the sensor. One pair provides the excitation current, and resistance (by voltage drop) is measured across the other.

The AnyLeaf RTD module allows you to connect an RTD (2, 3, or 4 wires; Pt100 or Pt1000) to a microcontroller such as an Arduino or Raspberry Pi.

Thermisters are accurate in a narrower temperature range than RTDs, and have an exponential response, instead of linear. They drift more over time, but are more durable.

Thermocouples are made of the junction of two different metals. They output a voltage that depends on temperature at the junction, by using the Thermoelectric Effect. The most common type is the Type K, which uses chromel and alumel (nickel alloys) as the junction metals. These can measure temperatures in the range of −200 °C to +1350 °C. The table on this page shows other types of thermocouples, and their properties. Like RTDs, K-type thermocouples have a nearly-linear response for temperatures over 0 °C.

Here are example responses for the most common types of thermocouple. Notice how K type is the most linear. Also notice how all the lines pass through 0 mV at the origin: This is due to thermocuples using a reference junction, either in an ice bath, or more commonly with cold junction compensation. The voltage from the electrode taking the measurement is compared to the reference's voltage. 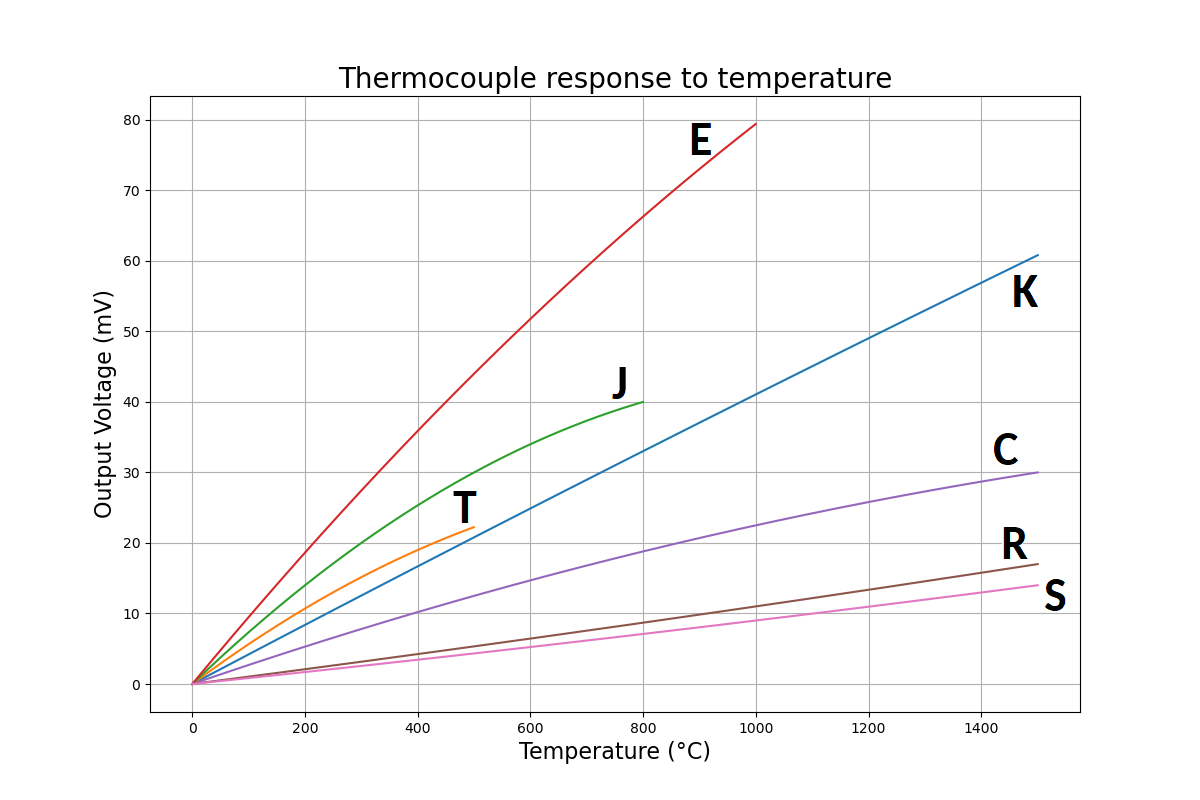 Because thermocouples response is in the form of an output voltage, they use very little power. This is because we can measure this voltage without running a current through the sensor.

The biggest drawback of thermocouples is their low precision: typically 1 - 2°C. This may or may not be acceptable, depending on the application. Thermocouples are common in industrial applications, where measuring high temperatures is required, and the precision requirement is low. They're also used in home thermostats.

Integrated circuits are microchips that measure temperature, and output it directly, either as a processed voltage that maps to temperature, or a digitized temperature. They're the easiest to design circuits for, and program for, but may not be as accurate or precise as other types of sensors.

Digital ICs may communicate using a digital protocol like I2C or SPI. Analog ones are usually plugged into an Analog-to-digital converter. An example of a popular digital IC is the DS18B20.

Because the processing happens near the site of measurement, noise through the lead wires is minimal. Because of this closeness, they can't be used at temperatures higher than the circuit can tolerate. For example, using in a very hot setting might damage or melt the circuit!